A rotating programme of installations over a 7-month period in the window of The Central London Osteopathy and Sports Injury Clinic, 325 Old Street, London,

Nowadays is a project conceived and realised outside the confines of a conventional gallery space utilising the window of The Central London Osteopathy and Sports Injury Clinic in Old Street, just off Hoxton Square, with the generous support of the clinic’s director, Mr. Torben Hersborg (www.london-osteopath.com).

A group of international artists working collaboratively, on solo-projects and an artists’ collective will create site-specific installations exploring the conceptual pairing of ‘dominance-existence’: the desire for power, control, and materialistic achievements propelled as a valuable cultural model by a large part of western society is juxtaposed and set against the search for inner peace and meaning in life.

The tension between these quests (the trade-off between the American dream and the Enlightenment of the Buddha) touches on many contemporary issues as globalisation, identity, territory and societal ordering.

Six by Eight focuses on ideas directly associated to power and dominance: corruption in politics, the attribution of status and rewards, the distribution of wealth, speculation in contemporary art, the use of war for imperialistic aims, and the secularization of the Catholic Church.

These six issues, selected by the artist as close to his experience and cultural background, are discussed in a video where political, religious and celebrities figureheads are portrayed with grotesque masks and with a blank paper, which stands as a kind of epitaph.

Quotes from the different personalities are flashed in the screen, aiming at soliciting in the viewer a participatory frame of mind about realities and acknowledgement.

Next to the video, embroidered texts, conceived in a kind of journalistic format, represent open and uncompleted comments on the six issues above mentioned, with red dots in the place of missing words. The viewers are invited to fill the missing words on-line or on photocopied versions of the embroidered sheets, giving full meaning and content to them, and thereby referring to relational and collective thinking, and to the power of interpretation.

The texts also refer to the presence of a ‘intelligent public’ that appears to look at things with a sort of detachment, seemingly standing as a group of wises against the madness of the others.

What starts out as a comment on dogmatic systems of power and thinking transforms into a playful and open-ended commentary that questions the legitimacy and efficacy of these systems. 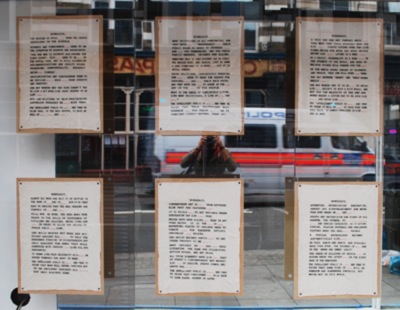