Untitlable (You Look Fit! Are You Healthy?)

Untitlable (You Look Fit! Are You Healthy?)

In the lyrical poem ‘L’Infinito’ (The Infinite), the Italian poet Giacomo Leopardi (1798-1837) expresses the sensation of bewilderment he was feeling when trying to consider the idea of the Infinite. He describes himself sitting on an isolated hill, described as a nest, when suddenly a bundle of thoughts and emotions about places, time, and events bring him into an ecstatic and sublime state.

The background image of the installation is a repeating fractal image. It depicts a geometric space that can be endlessly splits into parts like a snowflake. Each part is a reduced-size copy of the whole. Fractals are supposed to explain and model many phenomena, as matter expansion, cosmic dispersion and the movements of the galaxies.

Worked on the fractal wallpaper are cup-up free postcards with the text: ‘You look fit! Are you healthy?’ This type of cards is available in many locations all over the world, yet their message and lifespan is often short; they are used in the installation to deal with the idea of the Finite.

The Installation references the duality Infinite-Finite, so much part of Human Nature, which swings between a longing for the Infinite (somehow ‘Untitlable’) and its confinement in the Finite.

The nest mentioned by Leopardi in L’Infinito, which has been literally recreated, represents a place of retreat, a spatially and temporally determined hermitage, but also as a gateway toward the Infinite and the Unknown. 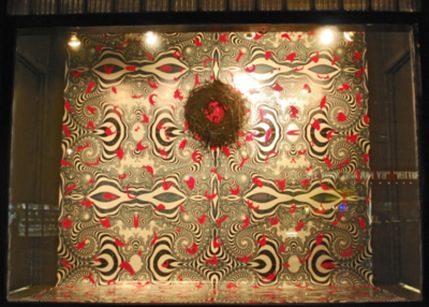