G and Other Letters

G and Other Letters

The project explores issues related to illegal drug trading and to the systems of laws and regulations to control them, challenging the boundaries of legality without overstepping them. It also comments on safety and danger, and reality and desire.

The project was initially supposed to include a live performance in which the artist would have prepared an illegal drug (GHB). Showing the process ‘for real’ was vital in order to make a point about how easy and fast it is to obtain a powerful homemade drug. After a long period of negotiating, and due to issues of legality and security, it became clear that such a performance would not be possible, thus bringing into realisation the production of a video, presented herein along with an accompanying installation and an additional wall sculpture.

The video is entitled ‘G’, as the name commonly used to identify two drugs (one chemically obtainable from the other), mostly consumed in the urban club scene, and for sexual enhancement. G has widespread over the last ten years, mainly as it is very cheap and easy to get. GBL (gamma butyrolactone) is a powerful cleaning solvent, often used for professional rust removal, purchasable online (1 litre, depending on the country of production, costs on average £60). Despite being an acid and corrosive substance, some people consume it as it is. Alternatively, through a simple home manageable procedure, GBL can be transformed in GHB (gamma hydroxybutyric acid), which is less corrosive and less dangerous in case of an overdose.

It was only in late 2009 in the UK, as in some other UE countries, that it became illegal for individuals to buy GBL, although purchasing it remains legal under declaration of professional use; furthermore, its production remains legal worldwide. While the possession of GBL by an individual who cannot provide evidence of professional use is illegal, both GBL and GHB are not ‘illegal’ after they have been consumed.

The video is constructed on three levels: images, lyrics and music.

The images, resembling educational programmes from the ’70, show the preparation of GHB from GBL.

Alongside, an installation is presented, staging the table with all the ‘ingredients’, ‘tools’ and the recipe used to prepare GHB, as seen in the video.

The text, narrated over the moving image, brings the discourse to a more abstract level, mediating on issues of boundaries and their overcoming (the effects provoked by drugs’ consumption and the desire of overcoming boundaries).

The first music track is a melodic and melancholic Improvviso for piano by the Italian composer Vittorio Testa; while the second track is House music, a reference to the usage of G in the clubbing scene context.

In the wall sculpture, Untitled, six plaster hands are cast in the position of holding different types of drugs, along with the tools commonly used to consume them: ecstasy (also called E), key (also called K), kristal (also called T), MDMA, cocaine (also called C) and, again, G (hence of the title of the project, ‘G and other letters’).

A seventh hand is holding a bunch of pills that have appeared in the market recently, as legal ‘surrogates’ of the illegal drugs. This is another wired situation, as these surrogates are meant to be quite effective, as much as their illegal twins, but, due to their components and the way they are produced, they remain legal so far. 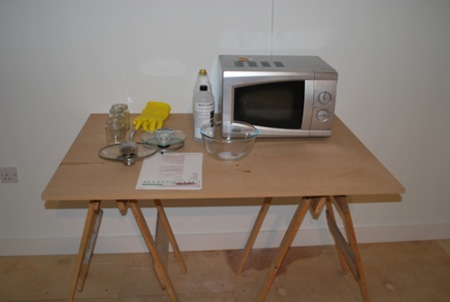 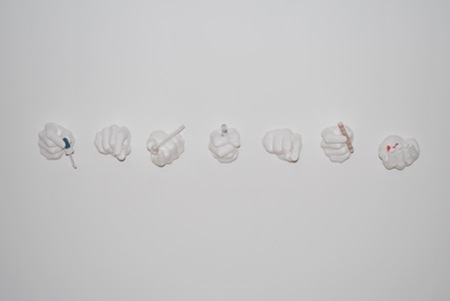